Communication in a structureless organization

How do structureless organizations communicate - and why is that an advantage?

In a recent post, I addressed the topic of "structureless organization" from a maturity perspective. Let us explore structureless communications by comparison.

An unstructured organization doesn't have direct, congruent or consistent links between people. Somehow, everyone fits into the picture - but this "somehow" may neither be meaningful nor helpful to the organization or its customers.

In the above illustration, there are inconsistencies between formal and lived structure (center), people who are somehow isolated from the structure (on the left) and broken links (manager to CEO). This means that necessary communication either doesn't happen - or only by chance.
An unstructured organization amasses communication debt at the missing links!

Now, let's look at what the communication looks like:

There are two communication chains. Assume you are a customer and need something that only the person (!) can help with.
Should you happen to address person (1) in the picture, they will refer to their manager, who will refer to another employee, who will refer to a coworker, who will ... blah yada yada -- until another manager gets involved, who will address an employee who happens to know the person who can help you. There's a good chance you've already stopped in frustration before you ever meet person (!).

Should you be so unlucky to address person (A) in the picture, they will refer you to person (B) - and you are none the wiser.

Of course, "unstructured" is merely a strawman as this is definitely an undesirable state for any organization to be in. Just be aware that even within your structure, there may be unstructured areas that simply "fall off the chart".

An indirectly structured organization has directed and usually consistent links between people. The only downside is the nearly inevitable incongruence between need and structure.


This is what a typical "org chart" looks like. Communication is centralized around managers, who then delegate the task back into their own unit, until an executable level is attained. The idea behind this is to maximize the efficiency of the workforce by minimizing the amount of disruption due to inadequate requests.
And this is how the communication is intended to flow:

Let us examine what happens when people are missing: Flu season is coming! 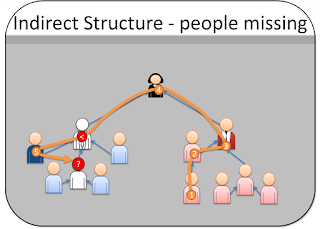 In this example, the blue manager has delegated represenation (<) to (?), so when Manager Blue is missing, (?) will act in their stead. This works out quite well when only one person is missing at the same time. However, when (1) needs a specific kind of help from team Blue, and the person named by Manager Blue as contact (?) is also missing, the communication chain is broken. When (4) realizes that neither (<) nor (?) is available, they might approach one person that occasionally also represents (<) - (5). However, that person is equally unable to help and so, the matter might remain sticking around until (<) returns. Usually, by then, the issue will be rotting as mail #51194 in Blue Manager's mailbox - abandoned, forgotten.
In the worst case scenario, person (1) would require something from their communication partner (2), but has been named representative of (2) and the superior of (2), namely (3) is also missing - so (1) might be stuck in a catch-22 - making indirect structures similarly susceptible to fault as unstructured organizations.

Side note: I happened to work for an organization once where the CEO claimed in an official newsletter that "if everyone would follow the defined communication paths and stop addressing other departments directly, we would be much more efficient". Does he really believe that?

In reality, most communication in org-charted, indirectly structured organizations happens outside the formal chart - because it's so terribly ineffective. They implicitly create - direct communication, just to be able to get things done.

The issues so commonly often associated with indirected structured can abysmally hamper an organization. Silo structures with broken escalation chains lead to tremendous inefficiencies. Direct structures resolve this matter by installing direct points of contact between departments who reduce both the amount of managerial involvement as well as the amount of steps required to get something done.

The typical term commonly associated with direct organizations is SPOC - "Single Point Of Contact". A senior member of each unit who is familiar both with the work that can be done by the unit and the people doing the work within the unit is assigned "SPOC". This person can be approached by anyone regarding requests within their unit, so SPOC Red would receive all requests done by Team Red.
SPOC's are transparent, so a customer would either approach SPOC Red directly, minimzing the amount of overhead - or, if they don't know who SPOC Red is, they would approach anyone who would immediately know that SPOC Red needs to be addressed.

SPOC Red might either handle requests to Team Red immediately or involve any team member from Team Red who can help. If SPOC Red receives a request that would massively interfere with how Team Red operates, SPOC Red will involve Manager Red for a decision.

The reason why many organizations do not move towards direct communication is fear - managers fearing the loss of control.
In a directly structured organization, managers aren't even aware of what their staff do most of the time. They operate autonomously to do what they can do to help the organization. This requires trust.

So - are there any drawbacks? None that would warrant going back to indirect structures. Compared to indirect structures, there are no business relevant downsides to establishing direct structures.
The only drawback is queuing - the SPOC is an implicit queue. In some cases, the queue becomes explicit by having a ticket system where the SPOC stores and distributes requests. The more SPOC's an organization has, the more queues they own.

How do we solve the queuing problem?

Queues are horribly ineffective to manage - request load is hardly ever balanced in the working world. While one SPOC idles, another might not know how to handle all those requests. Managers might be tempted to install multiple persons as SPOC - increasing the throughput of the queue without ever addressing the issue why the team receives so many requests.
Structureless organizations are different: 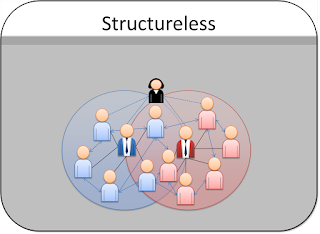 And this is how structureless communication happens: 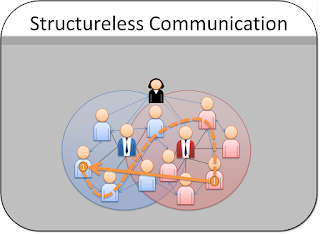 When someone (1) in team Blue needs something they aren't familiar with, they ask around in their network. Maybe this is another colleague or even the manager - no reason not to. Manager blue might refer them to another person who works closer to that area of expertise, but who might not have the answer either. This person will then check their network until they found someone who can help.

This is where the Bacon Rule kicks in, which posits that the maximum separation path between any two people on Planet Earth would be six, so usually within an organization, there would usually be four or fewer leaps until someone (!) is found. Once help is avaiable, the person will connect directly with the requester - so the next time, no communication path would be traversed.

In a structureless organization, neither Manager Blue nor Manager Red are concerned with what (1) or (!) are doing and how much time it costs: If it's the most important thing for (1) to work on, there's a good chance that (!) benefits the organization as a whole by chiming in.

What happens in a structureless organization when people go missing? Not much. First, people get familiar with the work of people done in their network, so they might actually be able to do part of it by themselves - otherwise, they do have some insight who the contacts of the missing person are and will ask around there.

I would like to conclude with a small illustration of what happens in a structureless organization when one person leaves: Fill a bucket with water and put your hand in. Look at the water, look at the hand. Take your hand out. Look at the hole it left ...

In a structureless organization, you are treasured part able to contribute. No bad things happen when you leave. You are free to be where you are or go somewhere. The organization can cope with it. No bad feelings when you're on vacation.

From an objective perspective of reason, there is no reason to not move towards a structureless organization. This does not mean that there are no arguments against structureless. Most of them fall into a fear category:


All of these fears can be handled, although this takes a lot of time. Once someone has seen the beauty and effectiveness of structureless organizations, most of them go away.

To conclude, I will provide you with some examples of structureless organizations:

Moving towards a structureless organization

In a recent post, I explained the concept of "Structureless". Let's dig a little deeper into how we can explore this concept to build high-performing teams and organizations.


Without explaining the above model too much further, let's see how we can use this model in team organization.

It's very easy to set up an unstructured team - basically, all you need to do is: nothing. Even then, people dislike the chaos that ensues and will usually self-organize to create at least some kind of structure. What I see happen as a first step to move away from the total lack of structure is contact lists - people making lists who can be contacted for what.
This is often the first thing people would do when confronted with a new working environment.

Direct structures emphasize the value of getting things done. They regard results higher than personal affinity and value outcome over process.
Very few organizations make the leap from indirected towards directed structures, and this relies especially on "managers getting out of the way". Direction requires re-thinking the manager role in fundamental ways. The toughest nut an organization needs to crack when moving towards direct structure is Larman's Law #1, the implicit optimization around preservation of personal power.

It's not inherently bad to be in any given stage, even if that stage is "unstructured" or "indirect structure". The important pieces of the puzzle are understanding:

While I think that it's possible in theory to move directly from unstructured or indirection to structureless, my personal observation has been that this is extremely difficult. I personally like to move towards direct structure in a matter of days or weeks, and enable structureless from there.
The most important piece of the puzzle is understanding that once we stop with an indirect or direct structure, we create a stable condition where change becomes increasingly difficult as time proceeds.