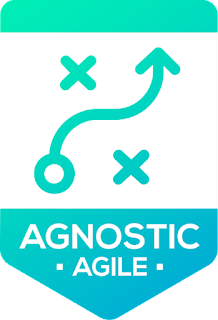 Agile FACT – what’s that?
Are you also fed up with the constant „framework wars“? Why do you need to choose between Kanban, Scrum and XP? Why would you bother to decide whether LeSS, SAFe, Nexus or Scrum of Scrum is “better”? Do you believe that “better” even exists? What is your benchmark for comparison?

FACT- yet another framework?

Let me explain the idea behind FACT: It is not yet another framework. I chose the term “Framework Agnostic Coaching and Training”. We’ll get back to the second part later. To understand why I chose this term, I'll explain my reasons:

Religion, in its original meaning, “religare”, means nothing short of “[to be bound by an] obligation”. It is often connotated with the notion that people do and think something that has been ideated by others. Is the agile school of thought yet another type of religion? The agile community constantly has to deal with “cargo cults”, a rather comical outcrop of religion – people who are doing things in the unfounded hope of achieving a benefit without understanding that they are completing a ritual that might work by chance - if they had some preconditions they are unaware of.  Doesn’t it have an odd ring that the Scrum meetings are called “ceremonies”? Isn’t that an invitation on a silver platter to commence them in a religious fashion?

Agnosticism is the idea that unless an idea can be tested and validated, it does not make a difference. Beliefs should be limited to verifiable claims.  As Thomas H. Huxley, said, "I see no reason for believing it, but, on the other hand, I have no means of disproving it. I have no a priori objections to the doctrine."

This translates into the agile school of thought as well. Let me give you one example: Where does the idea that "we need to work in Sprints” come from? In Scrum, the answer is: they are needed, because otherwise, it’s not Scrum. A Scrum practicioner can quickly explain how not working in Sprints will increase your risk of failure to near-certainty. If you look at Kanban, there’s no such concept – and companies using Kanban are doing just fine. On the other hand, a Kanban practitioner will give you a loaded deck of slides that will make you feel ridiculous for even considering the idea of a Sprint. But: is it even worth arguing whether Sprints are needed?
An "agile agnostic" has no a priori objection to either sprinting or not sprinting.

Now, let us discuss the second part of FACTs:

When you go to an agile framework training, you expect to learn about that framework. That’s actually good, because you want to know something, you want to learn. When I give Scrum trainings, you will to learn just exactly how you should use Scrum and why it is a good idea.  You would consider my training a waste of time and me a bad trainer if after 2-3 days of training, you weren’t fully convinced that this framework is the right thing for you. So, I will lay out my chain of reasoning in a fashion that eradicates the last spark of doubt that this framework is what you have always needed.

Reality check: This happens with any framework. Now, it’s a different question whether in your situation, the specific framework you attended the training for is suitable in your context – and yet another question whether it’s the best choice for you. You book the “framework X” training, and you get trained with framework X. Alternatives and limitations are purposefully descoped.

The only way to understand whether you can discover which framework is the best for you is to learn about all of them in-depth. And even then, the dice will most likely be cast by the instructor who is most skilled at manipulating you.

Don’t think that coaching is much different. When you hire a framework-specific coach, they will help you adjust your belief system to be consistent with whatever framework they are specialized in. That’s what you pay them for.

If you want neutral advice, you need to realize that the entire agile certification industry is ensnaring you towards their specific flavor of agility. How to get out of this trap?

Every flavor-of-the-month program includes training and coaching in the respective creeds of that flavor. Framework Agnostic Coaching and Training (FACT) will not direct you towards anything with an a priori premise. There is no need to suggest that “if it doesn’t work, you’re doing it wrong”. It does not rely on anecdotal evidence to affirm the Consequent.  It doesn’t resort to appealing, yet fallacious reasoning. FACT is a guide for discovering and exploring new ideas on your own. FACT is about finding new, better ways of working based on where you are and where you want to be. To this extent, FACT will resort to any concept that is consistent with your needs – without considering the rigorous dogma of a specific framework.

FACT is not a framework, not even a composite framework or a meta-framework and it's not "cherry picking", either. FACT is the idea that there is no “one right direction” as long as neither your current position nor your goals are known.


Are you looking for framework-specific fables – or FACTs?