The Cost of Learning

Time and again, I read stuff like: "The role of the coach is to guide a client in solving their problems, rather than providing a solution". Well - Reducing complexity is a talent, and this statement is a strong simplification. Here's why I personally think this isn't always the best choice. 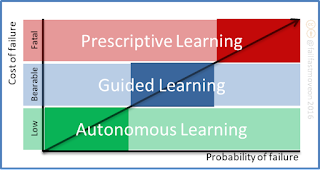 One basic premise of agility is "Responding to change over following a plan".This value is made real by constantly reducing the cost of change, to the point where you'll never need to follow an invalid plan simply because it costs less to continue doing the wrong thing. A low CoC is a premise for "being agile".


Let's look closer: Change does have a cost associated, and you can't simply declare that cost to be Zero, in disregard of every evidence to the contrary. You must understand what the cost of change for a given change at a given time actually is.

This is where the coach/consultant comes into play. Both have the responsibility of inducing change. The coach would work on getting the responsible people, for example the teams, to embark the change process by learning by themselves. They need to be cautious, as especially in the initial stages of agility, the cost of change may be extremely high.

There's a problem in the learning process: Learning, obviously, means that you haven't done it yet. And that can pose a problem: You might fail. Well, failure is not inherently bad. We might argue that failure is an essential part of the learning process. That may be true, but you need to be aware of the failure costs.
The danger that a person/team/organization is exposed to is a correlation of likelihood and incurred damage. For example, it's low danger to "learn" that putting salt into a cup of coffee is bad and therefore, you should use different containers for salt and sugar next time.
It's a completely different thing to "learn" that it's a bad idea to first pull the pin from a hand grenade, then put the grenade into your pocket: There won't be a next time.


Impact on the approach

We should always consider the cost of failure for any potential course of action. Low-risk topics that pose little danger to organizational health are not typical scenarios for requiring external support. Hence you wouldn't hire a consultant for that. People are more likely to ask for help the closer they feel to being to the Point of No Return.

Self-learning is a better course of action only when two conditions are met: 1) We will not cross the point of No Return and 2) It's a positive long-term business case.
Even though, I do admit that 1) automatically invalidates 2), the latter might still be easier to figure.
If those conditions are not met, a prescriptive course of action is more appropriate.

Depending on the consequences, we a different strategy is required:

When the cost of failure is low and people are likely to come up with a good solution, there is no need for outside involvement. Where the consequences are bearable while time is precious, guided learning can speed up the process and we can avoid reinventing the wheel.
When there's a high risk of incurring an irrevocable, negative outcome by not doing things in a specific way, then "Do this, think about it later" is an appropriate course of action.

The highlighted boxes in the model are the most economic situational approach - the green, blue and red horizontal areas with lighter color should be considered depending on the predicted outcome.

There is no one answer to how learning should take place.
While it's very convenient to simply lean back and "encourage self-learning", that's not always appropriate.
Just like a parent would not encourage their two-year old kid to "discover the miracles of 220V AC", a coach might need to become quite prescriptive.


The directive is basic human ethics: "minimize overall harm". We can both do harm by neglect (damage to team's credibility, business etc.) and intervention (damage to understanding and desire to explore). There's a tradeoff, so choose wisely.