Why organizations use Scream

The Scream framework has struck a nerve. This parody of the Scrum framework isn't just loaded with antipatterns - hundreds of people have already noted how similar Scream is to what they observe in their own organization.

Scream is a parody, and it would seem like nobody in their right mind would do those things - yet people do exactly that. But why?

Scream is effective. It works. The patterns found in the Scream Guide are all ways in which specific problems the organization has encountered have been addressed. And unlike Scrum, there is no rigour to Scream - it works very similar to the ice cream truck in summer. It addresses a need and makes people feel better. 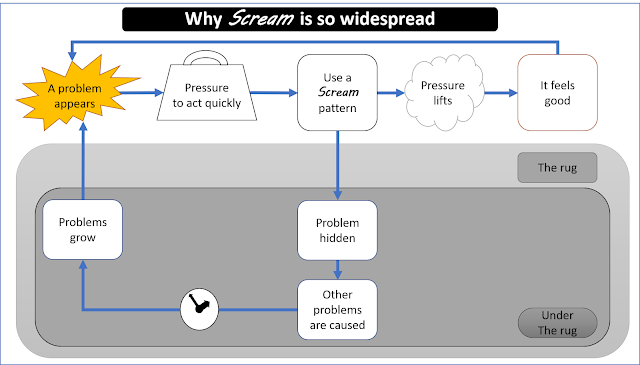 The Scream flow is easy and intuitive.

On the surface, it works like this:
A problem appears, and there's pressure to act before this becomes a personal issue, such as having an escalation, seeing your performance review drop, and therefore your bonus disappearing or whatever.

So why spend time to identify and isolate the root cause which may be hidden somewhere outside your own sphere of control? Pick a Scream pattern and apply it.

The pressure lifts - or at least, it goes down a few marks on the scale. Scream experts learn to throw Scream patterns at problems before anyone has even noticed there's an issue. Stress levels return to normal, and there's even a reason to celebrate having taken care of an issue.  Instant gratification.

And when the next problem appears? Rinse and repeat. Scream becomes routine quickly.

There's an insiginificant fly in the ointment. It's so miniscule that most managers and developers are more than happy to just let it go, as the evening is saved and no further meetings are required on the issue:
The problem wasn't solved. A band-aid patch is no cure. The core of the issue has been shoved under the rug, and the Scream "solution" has added another problem to the batch. No matter. Let's call it a day and move on to something completely different while the rizom continues to grow.

And one of these days, it will be harvest time. The problem has grown bigger than the rug and starts to resurface.

No problem - just apply the Scream flow and shove it under the rug again. It feels good to see the issue gone again.

Scream effectively makes problems disappear in an instant. This feels good. Even though the problems resurface and grow, there's always a solution: More Scream.

Email ThisBlogThis!Share to TwitterShare to FacebookShare to Pinterest
Labels: screamnotscrum