The dictatorship of Relativism

Unfortunately, the relativism which permeates modern society is also invading the "Agile" sphere - and thus, organizations. This is especially detrimental because these organizations build software systems which have a significant impact on potentially millions of other people. 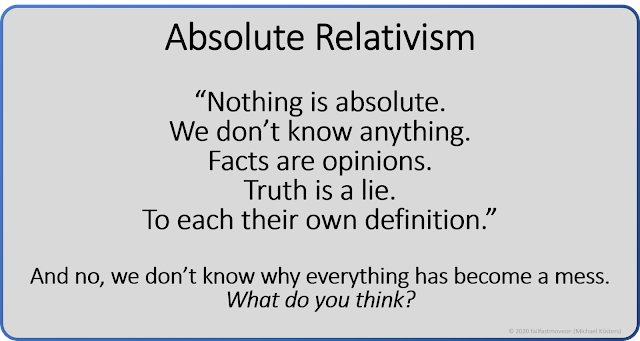 It's all about Perception

Perception is extremely important in how we interact with the world around us. It's the combination of our sensory organs, our experiences and our neural processing which detemines how we perceive a situation. Therefore, people with different backgrounds will have widely different perceptions on the same subject.
Yet, to build up anything sustainable, we need to be as accurate and precise in our perception as possible.

There are still facts

Without trying to harp too much on the Covid pandemy - a virus doesn't care what we would like the situation to be, or whether we believe that it's a significant threat. There's nothing we can discuss or negotiate with the virus and we can't tell it anything, either.
We can't bargain with it, we have to face reality and work our way from there.
The same goes for business figures. And IT. You can't argue with the bank account that it would be nice if it were just a bit more positive. You can't tell a crashing stock market that developers feel bad about it. Your server doesn't care which of its 0's you would prefer to be 1's. What's there - is there. You have to submit and deal with it.

How sustainable is the willful ignorance and denial of the facts that reality confronts us with?

Is it okay to have a clear opinion on a matter? Yes.
I would even go so far as to state that many people who claim to "have no opinion" are either deceiving themselves or (trying to) deceive others. In some cases, I would go as far as attributing malice. This becomes most obvious in cases where people who profess to have no opinion become militant against someone who voices theirs. If you're really un-opinionated either way, why is that specific opinion so much of a problem?
The scientific approach would be to examine a claim based on the evidence, and if it holds, to support it - and if it doesn't hold, to dismiss it. There is no, and I repeat, absolutely zero reason to attack the person who proclaims an opinion simply for having it. And still, that is what we see. Logic dictates that we must discredit the idea, not the speaker!

Is an open, transparent workplace consistent with censorship and thought crime?

A general rule of science is that "models with predictive capabilities are better than those without." The quest to increase the predictive capabilities of our models has brought us running water, heat and electricity for our homes, it has given us cars, computers, the Internet - and sufficient food onto our plates.
While arguably, no reputable scientist would say that any scientific model is perfect or beyond scrutiny, we first need to find a case where scientifically validated models and methods do not yield the predicted outcome before we should discard them - especially where they have proven time and again to produce significant benefits.

What are these "better ways of working", compared to the effectiveness of verifiable methods which have been proven to achieve significant improvements?

Evolution has ingrained us deeply to recognize patterns. Our brains are wired to seek patterns everywhere, and match to the most probable ones.  When we look at the sky, we see flowers, sheep - and many other things. That is our mind playing tricks on us. But it doesn't discredit patterns as a whole.
For example: Five people ran in front of a train. They all died. See a pattern there? Do you really need to run in front of a train to figure out what will happen?

Should we dismiss the idea of patterns, and in the same breath apply patterns that have nothing more than anecdotal evidence as support?

Especially in times of change, we need orientation. And in almost every case, even a sub-optimal fixture is more beneficial than a complete loss of support. Few leaders think of themselves as beyond scrutiny, and oddly, it's those who do so tend to attract the largest following in times of turmoil.
Is it better to lead or to not lead? When people need direction and are unable to find theirs, it's usually the most ethical choice to set a direction first, and then offer the opportunity for change.

Would we prefer everyone struggle by themselves, denying them the benefits of rallying around an idea they can all agree to?

Not everything is relative.

There are facts. We can misinterpret, misunderstand or misrepresent them - but they are still there. Instead of soft-cooking the facts, we need to get better at interpreting, understanding and representing them.

Everyone has an opinion. Neither are facts equal to opinions, nor are people who have a clear opinion automatically wrong. We have logic and science to tell us which is which. By celebrating the freedom to have even a wrong opinion, we learn to be respectful towards one another. Reasoning teaches us to sort out the wheat from the chaff.

We need predictability. We can't predict everything, but we can predict more than nothing. The more predictability we have, the more likely we will still be alive tomorrow. Instead of mushing up everything with the terms "complex" and "unknown", we need to simplify as far as possible (but no further) and learn as much as we can.

We rely on patterns. We're really biased in the patterns we observe and how we interpret them. At the same time, there are repeatable and consistent (scientific) patterns and (esoteric) phantasms. The distinction between the two is what brought us to where we are today, for a good reason.

Society is based on leadership. Strong leaders can be a great boon to others. Beneficial leadership can propel hundreds of thousands of people to a better future. If we want to truly help people, we help those who have the potential to lead to do it for the better.

If you are an "Agile Coach" who:

None of these things are helping your client grow. These destroy people's ability to do the right thing.

Do the right thing

Forget the labels. It doesn't matter whether we're called coach, consultant, advisor or whatever.
The client has a problem to solve, and they need help. Guidance. Support. Whatever. You're there to make a positive difference.

When the client needs to:

By doing these, you will be a tremendous help to the people around you, and a good investment for your clients.

While it's good to check the adequacy of our mental models: People to whom everything relative, or who promote the idea that everything needs to be discussed and strong decision-making is off-limits do not belong into business. Especially not into IT.


When you identify problematic stances and behaviours in your "Agile Coaches", get rid of them. Quickly. They will do more harm than good.

And if now you conclude that I don't have a "proper Agile Coaching mindset", that's totally up to you. I don't see "Agile" as an esoterical space where everything goes and nothing is true - I see it as a company's ability to do the best possible thing, swiftly and reliably. And that requires knowing what "the best possible thing" is. Where that conflicts with the label "Proper Agile" - so be it.