If you feel that your "Dailies" are an ineffective energy-drainer, it may have to do with the way you run them. Here's what I do. 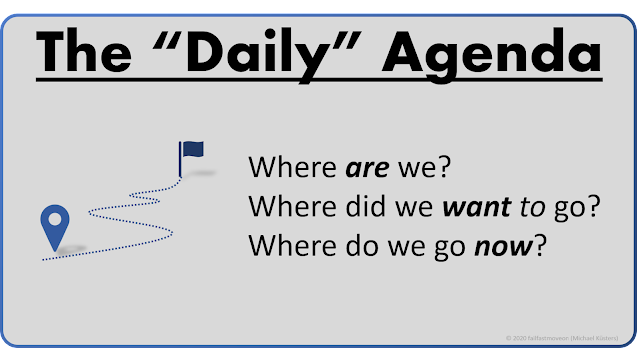 First things first, I don't like Scrum's "Three Questions" much, because in my opinion, they still invite over-emphasizing the work of the individual. So here's the focus I would like to set:

Focus on the goal

It's quite important, and this is where many teams already take a wrong turn, to have a proper, clear, SMART goal for the week (or Sprint). And that goal should be elaborated along the lines of "What is different for our organization at the end of the interval?", rather than "Do X amount of work".
The secret lies in measuring our progress against such a meaningful goal, because it allows us to focus on our relative position towards where we want to be. That becomes the measure of our "Inspect and Adapt".

Keep the goal in view

Even in a Remote setting, I have adopted a habit of writing down the goal and make it the center of attention in the Daily. When people join the Daily, I make sure that everyone takes a look at our goal. This primes the mindset.

Once we have a goal, all of our discussions should center around the goal:

I have attended too many Dailies which focused either on the work items or on the contribution of individuals. These meetings usually go like this:

Person A says, "Yesterday, I wrote 5 mails and attended 3 meetings. Today, I will meet with ..."
Person B picks up, does the same.
Rinse & repeat until meeting over.

When the meeting is over, we know everyone is doing something.
Unfortunately, we have no idea whether we're moving in circles, standing still, or even going in the wrong direction.
People are distracted from the goal, because they have to think about what they will say so that everyone knows they're busy.

When the meeting is over, we know everything "in progress" is being worked on. Maybe we also make sure everyone is working on something.
Unfortunately, again, we only know that we're working, not whether we're going to reach the goal.

Many times, it's not clear who gets what value out of a Daily event.
The most important thing to realize: This event isn't "for the Scrum Master", or "for the company". It is for the team, and as such, for the attendees.

"If any participant feels they are neither receiving nor contributing value, they should leave the meeting."
This could have the consequence that everyone is walking away from the Daily: that should trigger a conversation on whether you're bringing up the right and important stuff!

The flip side of the coin on value is: As attendee, you must be the one who is responsible for maximizing the value of your own contribution so that people won't use the Law of Two Feet on you.
Stop talking about things that don't help the team inspect and adapt their progress towards the goal, and limit your contribution to the minimal required input and questions which are relevant to remain and get back on track.
Posted by Michael Küsters at 6:34:00 AM

Email ThisBlogThis!Share to TwitterShare to FacebookShare to Pinterest
Labels: Facilitation