Now, let me explain this one in (slightly oversimplified) terms:

It's better to gain $5000 in 2 days than to gain $10000 for a year's work.
You can still go for those 10 Grand once have 5 Grand in your pocket, but if you do the 10 Grand job first, you'll have to see how you can survive a year penniless.
Always do the thing first that delivers the highest value and blocks your development pipeline for the shortest time. This allows you to deliver value as fast and high as possible.

WSJF is a simple four-step process:

To find out what the optimal backlog position for a given item is, you estimate the impact of doing the item ("value") and divide that by the investment into said item ("size") and then put the items in relation towards each other. 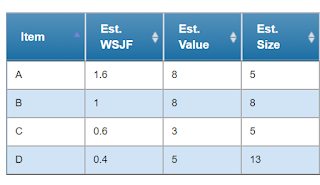 It's often suggested for estimated to use the "Agile Fibonacci" scale, so "1, 2, 3, 5, 8, 13, 20, 40, 80..."
The idea is that every subsequent number is "a little more, but not quite twice as much" as the previous one, so a "13" is "a little more than 8, but not quite 20".
Since there are no in-between numbers, when you think you're not sure whether an item is 8 or 13, you can choose either, because these two numbers are adjacant and their difference is considered miniscule.

Value (in SAFe) is actually three variables: User and/or Business Value, Time Criticality, Enablement and/or risk reduction. But let's not turn it into a science. It's presumed value.

Regardless of how you calculate "Value", either as one score or a sum or difference of multiple scores, you end up with a number. It becomes the numerator in your equation.

"Size" is typically measured in the rubber-unit called Story Points, and regardless of what a Story Point means in your organization or how it's produced, you'll get another number - the denominator in your equation.

"WSJF" score, in SAFe, is computed by dividing Value by Size.

As you add items, you just put them into the position where the WSJF sort order suggests, with the highest value on top, and the bottom value on the bottom of the backlog.
For example, if you get a WSJF of 3 and your topmost backlog item has a WSJF score of 2.5, the new item would go on top - it's assumed to be the most valuable item to deliver!

And now ... let me dismantle the entire concept of WSJF.

Disclaimer: After reading the subsequent portion, you may feel like a dunce if you've been using WSJF in the real world.

WSJF assumes estimates to be accurate. They aren't. They're guesswork, based on incomplete and biased information: Neither do we know how much money we will make in the future (if you do, why are you working in Development, and not on the stock market?) nor do we actually know how much work something takes until we did it. Our estimates are inaccurate.

Let's keep the math simple, and just state that every estimate has an error term associated. We can ignore an estimator's bias, assuming that it will affect all items equally, although that, too, is often untrue. Anyway.


Why is this important?
Because we divide two numbers, which both contain an error term. The error term propagates.
For the following section, it's important to know that we're on a Fibonacci scale, where two adjacent items are always at least 60% apart.

The same holds true for Size. I don't want to repeat the calculation.

Remember - we're on a Fibonacci scale, and we only permitted a deviation by a single notch. If now, we permit our estimates to be off by two notches, we get significantly worse numbers: All of a sudden, we could be off by a factor of more than 6!


Now, the real problem happens when we divide those two.

Now, I hear you arguing, "The actual numbers don't matter... it's their relationship towards one another!"

There's a problem with estimation errors: we don't know where we make errors, otherwise we wouldn't make them, and we also make different errors, otherwise, they wouldn't affect the scale at all. Errors are errors, and they are random.


So, let me draw a small table of estimates produced for your backlog:

Feel free to sort by "Act. WSJF" to see how you should have ordered your backlog, had you had a better crystal ball.

And that's the problem with WSJF

We turn haphazard guesswork into a science, and think we're making sound business decisions because we "have done the numbers", when in reality, we are the victim of an error that is explicitly built into our process. We make entirely pointless prioritization decisions, thinking them to be economically sound.

WSJF is merely a process to start a conversation about what we think should be priority, when our main problem is indecision.
It is a terrible process for making reliable business decisions, because it doesn't rely on facts. It relies on error-prone assumptions, and it exacerbates any error we make in the process.

Don't rely on WSJF to make sound decisions for you.
It's a red herring.

The discussion about where and what the value is provides much more benefit than anything you can read from a WSJF table. Do the discussion. Forget the numbers.