What to do with A-Players?

There is a weird notion in the industry that A-Players are a problem for a team, and is it really a good idea to eliminate them so others can grow? Let us make the case. 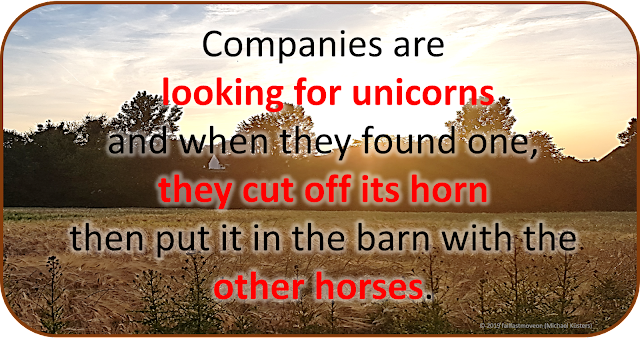 Before we can determine what to do, we need to be clear on what an A-Player is, and what they are not.

There are many sources on the Internet defining an A-Player by their attributes, and I will collect just some:

"For most things in life, the range between best and average is 30% or so. The best airplane flight, the best meal, they may be 30% better than your average one. What I saw with Woz was somebody who was fifty times better than the average engineer. He could have meetings in his head. The Mac team was an attempt to build a whole team like that, A players. People said they wouldn’t get along, they’d hate working with each other. But I realized that A players like to work with A players, they just didn’t like working with C players. At Pixar, it was a whole company of A players. When I got back to Apple, that’s what I decided to try to do. You need to have a collaborative hiring process. When we hire someone, even if they’re going to be in marketing, I will have them talk to the design folks and the engineers." - Steve Jobs

This short list alone should already clarify some misconceptions on what many people call A-Players. Let's continue.

The War For Talent

Steven Hankin (McKinsey) used the term A-Player in "The War for Talent" in reference to in talent management.
They came up with the items below:

In his 2001 book Jack: Straight from the Gut, Welch classifies executives into A, B and C Players.
These were the traits describing the "A"-Players:

While "B" players may not be visionary or the most driven, they are "vital" because they are the majority. The label "C" players was reserved for people who were pretty much the opposite of "A" Players. This coincides well with Steve Job's assessment that A players dislike working with C-Players.

Baskerville argues that every employee brings a mix of both hard and soft skills that will help a company achieve their vision. These combine with the Three C's - Coachable, Collegial and Committed. An A-Player would be exceptional in all of these dimensions:


When combining the key points from all of the definitions above, we realize quickly that the quest for an A-Player is the strife to find a unicorn.

Sometimes, they manage to actually find one of those unicorns, but they aren't prepared, because they are not experienced in dealing with unicorns. How can this end well?

Consolidating all of the above definitions, there should be little to no issue with A-Players. But ... there can be. If the system isn't supportive, in the best case, the A-Player will bolt for the door, never to be seen again. In some cases, the basic need for money to afford their living forces them to stick around and compromize on who and what they are.

The virtues of the A-Players mean that they also tend to exhibit pet peeves, that is, they will feel violated when forced to work with people, attitudes and behaviours that are in direct conflict with their virtues.

While an A-Player also exhibits the grit to to with exceptional events, if the system constantly pushes their hot buttons, they might use their talent in order to survive rather than thrive.

As hinted above, A-Players who have a choice will leave an unsupportive environment as soon as the opportunity arises. When they do not have a choice, their positive traits will gradually turn into negatives to minimize their own pain, eventually adapting to the surrounding system and becoming the very people displaying the things which used to be their own pet peeves - and being bright, they excel at this, too.

Depending on how the company culture has affected them, they may retain some of their positive characteristics, shut down others and adapt within those who have the most conflict.

While some people advise to outright fire them, as these people can singlehandedly block change, this is not a fix to the problem, as the root cause is of systemic nature.

The first step would be to validate whether the person is still coachable. However, if they smell that "coaching" is intended to manipulate them into compliance, there is no basis for change. Coaching A-Players requires discovering what they truly want, how they truly want to be - what is stopping them from achieving this and potentially even setting the right levers within the organization to make this possible.

In an agile working enviromnent, teamwork is essential, and team dysfunctions are the first things that are hurled at A-Players, the standard narrative is "A-Players are not team players, they keep down the team, that's why we need to get rid of them!"
As a first disclaimer: Some people are antisocial by nature and can not enjoy being on a team. These would, by definition, not be A-Players. Before we talk about the empty set, let's stick to A-Players.

I will take three examples, without a claim that any of them is fully representative of all cases in this category.

The A-Player who doesn't want to be on a team

I will refer to a personal conversations here from coaching one such case. This case is by no means representative, but it will show why addressing the person is by far not as important as fixing the system.

A recurrent statement this person made in many coaching sessions was, "I can not do everything alone. This thing is bigger than what I alone can do. I need others who are willing and able to take their portion. BUT - these guys are not just not pulling their weight, they are dumping their weight on my shoulders, too and then blame ME when I am not getting THEIR things done!"

It turned out that management was overly swift in assigning work to people whom they believed could solve the problem without relieving these people of their other responsibilities. When someone was overburdened, the quick fix was to reassign their tasks to someone who could do it. As such, management had created an environment where it was in every person's self-interest to be perceived as a low-performer who couldn't take further responsibility, while high-performers got ground to dust.

The A-Player who suppresses self-organization

I used to coach for a team had one outstanding person who had more ability, more knowledge and more grit - who had gotten into management spotlight for blocking self-organization.

What had happened? The company held team leads accountable for the performance of the entire team on a stack ranking system. The organization had taught him over a decade that permitting self-organization could get him fired and had never openly communicated that this had now changed. And yet, they expected him to change his behaviour.

We had a management failure to set, communicate and verify proper incentives.

The A-Player who takes the spotlight

I was coaching an A-Player who would ensure that every meeting drove home the point that she was pulling the main weight, that others were helpless without her - and that her suggestions needs to be followed.

Long story short: Another management failure.
She was definitely the brightest bulb in the lamp, but she suffered massive discrimination: Statements like "She's just a junior!", "Women in engineering!", "Do Africans even know what servers are?" were commonplace. Management not just tolerated, but even perpetuated these statements. She fought tooth and nails to prove her competence.
It was management that turned out to be uncoachable, not willing to see why their behaviour, both in action and inaction, created the problem they wanted her to stop.
I advised her to leave. She did.

In each of these cases, what would have been achieved by firing the individual who was pushed into a their rather unfortunate position by their management?

As an economic principle states, "People respond to incentives". It is madness to assume bright people will change the very behaviours that the organization incentivizes.

What makes A-Players A-Players is their ability to comprehend the system, the impact of the system upon them, and their impact on the system in a very short time. They will adopt exactly those behaviours that will maximize whatever they currently optimize for. As such, they can be great in showing what the flaws in the current system are and how the system needs to be changed in order to improve performance of the entire system.

I firmly believe that "firing the A-Players" is an easy cop-out that excuses managers of their own failure to set up a system which brings out the best in A-Players to propel the company to new heights.

I would seriously question the advice propagated by many of "agile gurus" that getting rid of the A-Players will allow the teams to flourish. This advice is myopic and misguided. It betrays poor systems thinking and a perverted sense of management responsibility.

Weeding out the A-Players sets the stage for mediocrity, and inhibits innovation. This is not just not an option - it's economic suicide!


Let's not confuse attention whores with A-Players. A-Players are the most valuable asset you have. They need to be protected at any cost.
Posted by Michael Küsters at 1:55:00 AM