Do we need frameworks to be agile or not?
Maybe. If we have a problem that frameworks solve. And if they are an appropriate solution.
Here are my five principles for change, which are paramount to the question of frameworks. 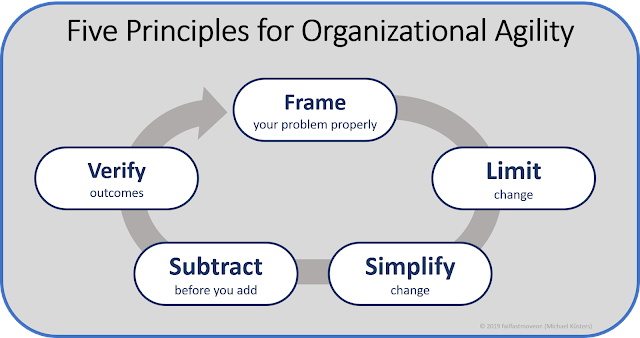 If you adhere to these five principles, my question would be: "What do you expect from an organizational framework?"

Learn to understand your problem before implementing a solution.
A poorly framed problem's solution may be worse than the current state.

Go beyond both the symptom and the Obvious and frame the problem correctly. And when you learn that you framed the problem in the wrong way, refine your problem statement rather than "working harder" to make the solution work.

There are great tools, like Ishikawa Diagrams, 5-Why-Analysis and many others which can assist you in getting closer to what your real problem is, in a very short time.

Only reduce the bottleneck constraint that causes the problem.
Large-scale changes will have uncontrollable, large-scale impact.

Tools like Process Mapping, Flow Diagrams, Lead Time Analysis and many others that will help you discover the single point where a change will be effective.

Do the simplest possible thing to reduce constraints on the current bottleneck.
Change should be so simple that it's effortless - if our idea doesn't work, we just try the next one until we find something that does work, and that's a lot easier when we make small, simple changes rather than implementing grandiose master plans.

Simplicity is an art - "anyone can make things complicated, it takes a genius to come up with something simple". When geniuses are hard to come by, it helps to involve the people who actually face the problem, as they often have a pretty good idea why something doesn't work, and they may just need the permission to do the right thing instead.


4 - Subtract before you add

Eliminate structures, processes or tools that cause problems.
The "simplest possible thing" we can do is usually getting rid of a blockage, not adding something.
Problems don't get solved by adding something on top.

Additions to an existing problem are like band-aids on a cracked pavement: They won't really help, won't last and won't make much of a difference. The existing problem needs to be addressed and removed. Often, this is already enough.

I like to use tools like Marshall Goldsmith's "Wheel of Change" to model the change, and tend to remind people that "For each thing you add, you have to remove one thing", because otherwise we create more problems (oftentimes elsewhere) instead of solving them.

Verify your outcomes before calling something a success.
Change is successful when the problem is gone.

Many organizations call change successful when the change is implemented - which often leads to "change for the sake of change", and people getting rewarded for doing things that don't help the company.

We can use methods like OKR to define which outcome we want to see, and if we didn't achieve this outcome, that should at least trigger the question of what the change has done instead.

Closing remarks
These five principles stand together and should be applied together.

A well-defined problem allows us to run a minimal change experiment in the right place, which allows us to verify fast and cheaply whether we're making an impact. And we need to get rid of at least one root cause of the problem to make such an impact.
Posted by Michael Küsters at 11:51:00 PM