Let me introduce to you to an agile framework that's much easier to learn, has a much lower hurdle of adoption, and much higher chances of actually making a impact than Scrum. It's leaner and more flexible and if you start using it today, you'll see results right away!

Every day, we do a whole lot of things of which we don't understand why, or we even know that the outcome is not optimal. That doesn't make any sense. When we realize that something doesn't make any sense, why do we continue doing it?  And still, that's one of the biggest scourges of companies worldwide: people do things that don't make any sense, and nobody questions this.
The SMF is intended to stop this nonsense.

People act in the most sensible way, given the information they have and the circumstances they are in. When people have the right information and communicate properly, they can quickly realize whether something makes sense. The minute you realize something doesn't make sense, talk with those around you and if others agree that it's nonsense, don't do it.

Sense-Making is incredibly easy to understand, yet incredibly difficult to master. Even with this simple five-step process, it can take years of practice, superhuman patience and strong perseverance to create an environment where everything makes sense.

Sense-Making is concerned with different categories of sense, fully well realizing that this is both a spectrum and shifts over time, both as the system changes and as you gain more understanding of what is going on.

When something makes good sense, just keep doing it. You may occasionally want to reflect whether something else makes more sense, but that's probably not your main problem - so direct your attention elsewhere.

There's outright nonsense, where everyone knows that this is nonsense, yet you keep seeing and/or doing it. Just stop it and see what happens. Then, replace it with something that does make sense.

"No sense" is different from "nonsense": there's an information and/or understanding gap and you don't know how and/or why would make sense. This requires further transparency and communication before classifying whether it makes good sense or is nonsense.
When you can't collect information that would help make further classification possible, stop doing things that make no sense and figure out what happens: If nothing happens, it made no sense to do it. If something happens, you have further transparency. 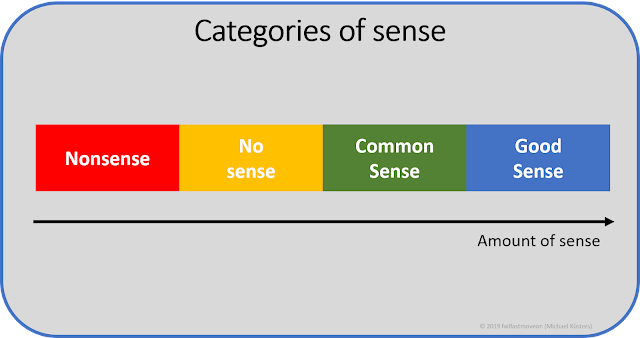 There are a few key mechanisms in making sense. There are no roles, artifacts or special events to sense-making, as that doesn't make any sense. Just do what makes sense.

When you don't know if something makes sense or are certain that something else makes more sense, communicate. Your environment is usually more complex than you understand, so openly involving others is key to making choices that make sense.

Stop doing whatever is nonsense, and stop doing things that make no sense.
When trying to do something that makes more sense, don't just add it on top, you also need to stop doing the thing you currently do so that you make more sense instead.

When you think something makes more sense than what you do, experiment - try it, and see what happens. Then, you have information to see whether it makes sense. In some cases, you learn that things made more sense before the experiment, and you may want to go back. 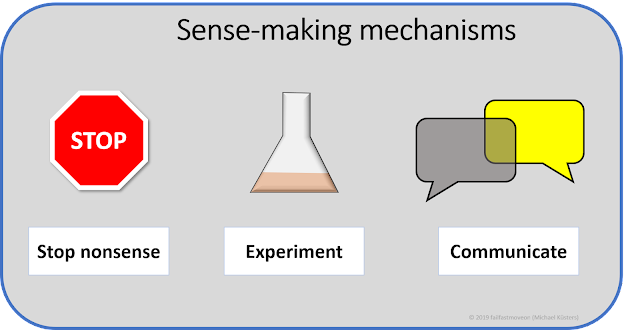 If you have the courage to start making sense in your organization, start with this simple process:

Email ThisBlogThis!Share to TwitterShare to FacebookShare to Pinterest
Labels: Guide