"We need to utilize all of our Story Points" - that's a common dysfunction in many Scrum teams, and especially in SAFe's Agile Release Trains where teams operate on a Planning horizon of 3-5 Sprints. It results in an antipattern often called "Planning Tetris." It's extremely harmful, and here's why. 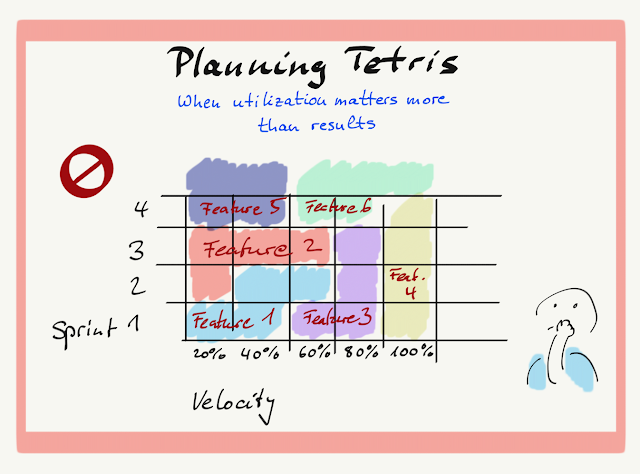 Although the above feature plan appears to be perfectly optimized, reality often looks different: all items generate value later than they potentially could - at a higher cost, in longer time and with lower efficiency!

Planning Tetris often leads to people starting work on multiple topics in one Sprint, and then finishing it in a later Sprint. It is resource-efficient (i.e. maximizing the utilization of available time), not throughput-efficient (i.e., maximizing the rate at which value is generated.)
That leads to increased Work in Process, which is a problem for multiple reasons:

Just like in the sample diagram above, "Feature 1" and "Feature 2" could each be finished in a single Sprint. And still, Feature 1 doesn't provide any value in Sprint 1, and Feature 2 has no value in Sprint 2. So, we lose 1 Sprint of marketability on Feature 1 (our highest priority) - and on Feature 2 as well:
A perfect example how utilizing the team makes the value come later!

Imagine now that every feature costs less than it's worth (which it should, otherwise it wouldn't be worth developing) - and you see that the "saved" efficiency of having worked on features 3 and 4 before finishing feature 1 costs the company more money than the added benefit .

You may argue, "different people are working on the features, so there's no multitasking."
Yes - and no. What is happening?
Sprint Planning for Sprint 1 has to discuss 3 features: 1,3 and 4. This means that the whole team is discussing three different topics, (none of which will be delivered in that Sprint.) The same happens in Dailies and Review. And, potentially at a source code level as well. The feature interference may also bloat up the complexity of technical configuration, deployment processes and the like.
The team becomes slower, hence less efficient.

In statistics, there's a phenomenon called "the high probability of low probability events." Let me explain briefly:  There's an infinite amount of almost infinitely-unlikely events, but unfortunately, high infinity divided by low infinitiy is still a number close to one: Something will happen. You just don't know what, and when, so you can't prepare or mitigate. Since you don't know which aspect of your plan will be affected when a risk hits, you'll always be caught by surprise.
How is that a bigger problem in Planning Tetris than in sequentialized delivery?

When you're working on one topic, and an event hits that affects your entire team, you have one problem to communicate. When the same happens as you're working on multiple topics, all of them are impacted, and you're generating a much stronger ripple effect.

As multiple topics are in process, you suddenly find yourself mitigating multiple topics. And that means multiplicative mitigation effort - less time to work, and at the same time a higher risk that not all mitigations are successful. You end up with a higher probability of not being able to get back on track!

Both the ripple effect into the organization and the mitigating actions could lead to unpredicted consequences which are even harder to predict than the triggering event. In many cases, the only feasible solution is to surrender and mark all started topics as delayed, and try to clean up the shards from there.

There's Parkinson's Law - "work always extends to fill the amount of time available." That's often used as an argument to start another topic, because it stops gold-plating and keeps people focused.
But there's also the (F)Law of Averages: "Plans based on averages fail half the time."
The latter makes planning tetris a suicidal approach from a business perspective: it starts a vicious circle.

Because there's no slack built into planned tetris, the mid-term plan will automatically fail as soon as a single feature turns out more complex than planned. The more features are part of our tetris stack, the more likely at least one of them will fail. And the team will usually get blamed for it. Because of that, we end up with

Teams must allocate the slack buffers into their feature estimates to reduce the probability of failure. When a Tetris plan spans multiple Sprints, some feature content may not be "Ready" for implementation during the Sprint when slack would be available - so we end up with Parkinson's Law, the buffered estimates don't reduce failure probabilities.

At this point, Parkinson's Law tag-teams with the Flaw of Averages to KO the team: Regardless of how conservative the estimates, the team will still end up failing half the time. The consequence is that business throughput continues to decline (there's an interesting bottom: when a Sprint only contains one feature!)

Let's take a look at the psychological impact of Planning Tetris now as well:

No space for Creativity

No space for Growth

The only relevant business outcome in Tetris Plans is usually business value delivered. It ignores that developers are the human capital of the organization, and growing them is growing the organization's ability to deliver value. Especially in the rapidly changing tech industry, not growing equals falling back until eventually, the team is no longer competitive.

No space for Improvement

I often advise that developers should take some time to look at "Done" work to reflect how it could have been done better, and turning that better way into action. With Planning Tetris, that opportunity doesn't exist - another feature is waiting, and improving something that exists is always less important than delivering the next big thing. That often ends in terrible products which are no joy to deal with - for developers and customers alike!

The point that Planning Tetris is a terrible idea should be blatantly obvious.
"Now what's the better way then?" - you may ask.
It sounds incredibly simplistic, because it is actually that simple.
Ok, too many words, so TL;DR:
All problems mentioned in this article = solved.
Posted by Michael Küsters at 12:18:00 AM